Home » Will the iPhone unseat PSP and DS? Not likely

Will the iPhone unseat PSP and DS? Not likely

There’s a lot of buzz on the Mac side of computing as a several game developers start signing up for the Mac camp.  Sure it’s exciting since big names like Sega are setting up for game releases and some people (in the Apple camp no less) are already touting that the iPhone is the next biggest thing in gaming.

Apple has the advantage of userbase (although I’m really curious as to how the 2,000,000+ iPhone users match up to the 100,000,000++ for the DS and PSP market) and a mature AppStore that both Sony and Nintendo are now just beginning to bloom so they may have a winner up their sleeve.

But after a reality check, sorry fanboys, here’s a few reasons why it’s going to outseat the current giants.

By the numbers, the iPhone looks like the clear winner, right? Not exactly. You see, the iPhone still has to handle OSX running in the background and no matter how lightweight it is, it’s much too heavier than the OS’s on the PSP and the DS. 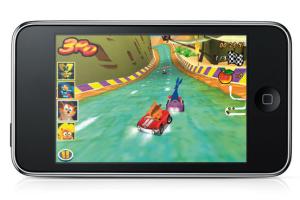 Gaming on the Iphone, not as hot as you think

Hands down, the iPhone is innovative.  The multi-touch is one of the biggest reasons that the iPhone sells but it’s also the biggest reason why it’s not meant to be big with gamers. Real gamers need their buttons in order to get their game faces on. Take for example a fighting game like Tekken.  Would you be able to execute combos by touching the screen?  I can imagine board games like Monopoly, Scrabble and chess as easily playable on the iPhone but when you add something like Monster Hunter, it’s going to be tough going.

The iPhone might be able to run Doom 3 but how will you control it?  You’ll be able to aim with the touchscreen, move with the iPhone’s tilt sensor but by putting your finger on the screen, you’re effectively blocking your view.  So much for FPS huh?

Yes, you can’t deny it.  The DS is everywhere.  Even I want one even if I’m a die hard PSP fan.  iPhones are simply too niched if you asked me.

Will you hand your iPhone to a 5-year old?

It’s arguably one of the best phones in the market because you’ve got a full fledged OS under it’s hood (No flash though) but as a dedicated gaming platform?  Lastly, the reason you’re buying an iPhone is because you want a phone, not a game console-wannabe.