Home » Lightning Returns gets two new costumes: the Vajra Bodhisattva and the Fushikaden

Lightning Returns gets two new costumes: the Vajra Bodhisattva and the Fushikaden

The Vajra Bodhisattva costume is only available via pre-order from HMV and Lawson, and comes with a costume, a weapon (Treasury ), and a shield (Warrior’s Return) 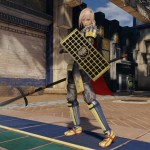 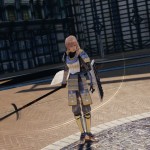 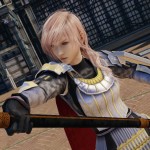 Vajra Bodhisattva (Costume) – The armor of a wise ruler who honored the heavens and loved his nation, and stuck to the ways of benevolence in a world of wars.
Treasury Palace (Weapon) – Forged as a prayer to the Gods, it was once the cross-shaped lance of a ferocious monk unparalleled in spearmanship.
Warrior’s Return (Shield) – A robust shield covered with a rivet of steel, it is said that it could deflect even a knight’s assault.

The Fushikaden, also comes with a costume, weapon (Direct Heart Shadow), shield (Charming Folding Screen) bundle, and is only available with all first-run copies of the official soundtrack.

Fushikaden (Costume) – Fighting as though in a graceful dance, the flowers of a turbulent time fly as you battle in a noble woman’s armor.
Direct Heart Shadow (Weapon) – Standing to face the invaders, protect the nation to the end with the sword of a noble woman.
Charming Folding Screen (Shield) – Like an ancient song composed of a dream-like spectacle, this is a brilliant shield.

Lightning Returns: Final Fantasy XIII is set for release on the PlayStation 3 and Xbox 360 on November 21 in Japan, February 11 in North America, and February 14 in Europe.