Judging from today’s update on the upcoming US release of Catherine, Altus really knows it’s market. ^_^

The game will be available in July for both the Xbox 360 adn the PlayStation 3 and will be available in the standard package (if you’re just interested in the game) or the “Love is Over” Deluxe Edition which is equivalent to the Collector’s Edition in most recent game releases. 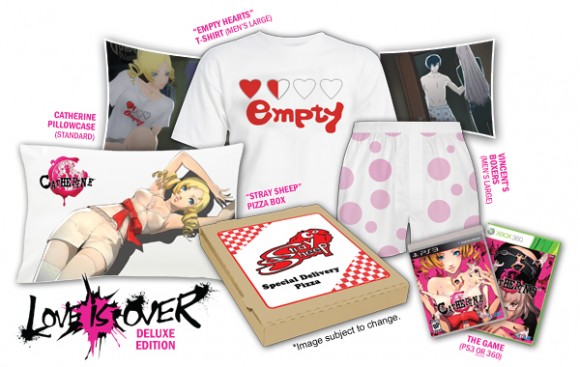 The Deluxe Edition of Catherine includes:

The Deluxe Edition is only available for pre-order and quantities will be extremely limited as Altus says they’ll only create as many DE units according to the number of pre-orders.

If you’re interested in the game and/or anything Altus, I recommend rushing to your favorite game shop and reserving a copy of the Deluxe Edition now.

Pricing for the standard copy of the game is $59.99 while the “Love is Over” Deluxe Edition will set you back $79.99.  Regardless of which version you get, if you pre-order the game, you will receive a bonus full-color 36-page art book and 11-track CD featuring the epic compositions of Persona composer Shoji Meguro.  Not bad for “extras” huh?

Here’s another look at the poster shown above: 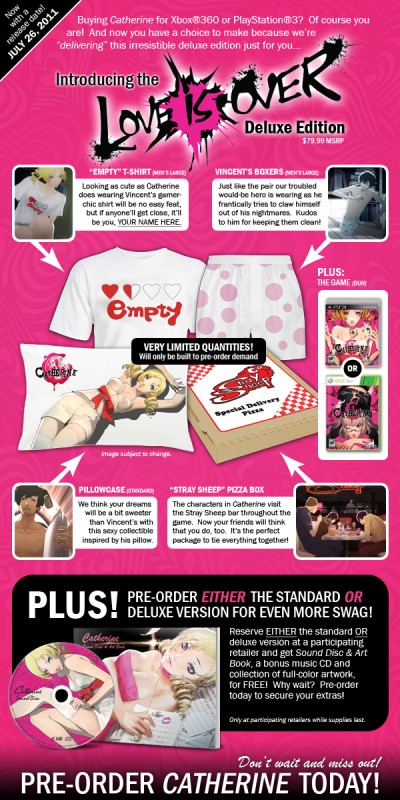 info via Catherine the Game