2kgames is set to release another major patch to Civilization V which will include game-balancing changes as well as the usual bug fixes which I hope will mitigate some if not most of the Civilization V crashes. 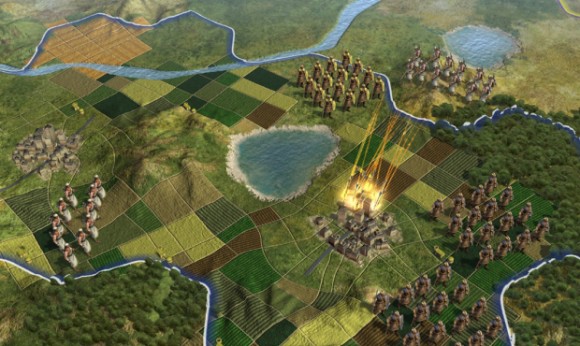 The five months into Civilization V’s release has given the civ team at 2kgames certainly enough information and reports of overpowered or simply imbalanced strategies as well as optimize code where it’s needed. The February patch promises, among other things, Significant turn time improvements, so anyone still playing the game is bound to be delighted with that. Dennis, the Civilization V producer at Firaxis also noted that future patches we’ll continue to iterate through Civ V systems and fine tune the balance of each one, and again offer bug fixes to anyone still experiencing issues :).

It’s great timing for the patch too as Civilization V is currently on sale via Steam.

Full details of the patch available after the jump.

* Significant turn time improvements.
* Invisible Rivers now display correctly. This caused many issues because the player could not see some rivers, like fresh water showing up in strange places, unit movement suddenly shortened, etc.. Basically, there were certain rivers that did not display where forks occurred, etc.

* Taper off benefit of excess food when building settlers
* City-States now recognize when a road is connected for their road-connection quest.
* Golden Ages now provide +20% production per city rather than +1 hammer per tile

* Can now use DLC civilizations in multiplayer
* Added Ring, Skirmish and Ancient Lake maps to MP.

* Clear up cases where diplomatic status could show as “Friendly” even after that AI power has denounced the player.
* Fix situations where AI demeanor and verbiage didn’t match friendliness level shown in diplomatic status string.
* Additional bug fixes and tweaks.

* Cities must now have three or more tiles in between them (1 more tile than before), unless separated by a sea/coast tile.
* Cities now only get 1 free production and 0 free gold (1 less in both cases)
* Trade routes get bonus gold based on population of capital; formula changed a bit so minimal gold received for hooking up very small cities
* Bonus production from excess food (used when building settlers) tapers off if excess is 3 or more.
* Allied maritime city states provide 3 food per turn to the capital, not 4
* Balance pass on production and maintenance costs throughout the game.

* Tradition: Culture border expansion discount in cities placed on Tradition branch opener. Discount increases over the course of the game. Also grants +3 Culture in the capital.
* Aristocracy: Wonder bonus reduced by 5% to 20%.
* Legalism: Provides a free Culture building in your first 4 cities.
* Oligarchy: Garrisoned units cost no maintenance, and cities with a garrison gain +100% ranged combat strength.
* Landed Elite: +15% Growth, and +2 Food per city.
* Monarchy: +1 Gold and -1 Unhappiness for every 2 Citizens in your capital.
* Liberty: +1 culture per turn in every city.
* Collective Rule: Settler production increased by 50%, and a free Settler appears near the capital.
* Citizenship: Worker construction rate increased by 25%, and a free Worker appears near the capital.
* Representation: Each city you found will increase the Culture cost of Policies by 33% less than normal. Also starts a Golden Age.
* Order: Reduce Order production bonus to 15%.
* Meritocracy: +0.5 Happiness for each city connected to the capital, and a free Great Person of your choice appears near the capital.

* Fish reduced to 1 food (but can be boosted back to 2 with Lighthouse)
* Marble boosts wonder production by 20%, down from 25%

* Scaled up tech costs throughout the game (slight change for early eras; close to double for Modern)
* Move Lumbermills up to Construction
* Move Bridge Building back to Engineering
* Move Ironworks to Machinery

* Colossus no longer goes obsolete
* Angkor Wat now provides a 25% discount for the costs (both culture and gold) to gain plots empire-wide.

* Reduce Chu-ko-nu from 10 to 9 ranged strength
* Doubled culture from kills for Aztecs
* Krepost now provides a 25% discount for the costs (both culture and gold) to gain plots in the city.
* Paper Maker only provides 2 gold but no longer requires any building maintenance