The Final Fantasy series is one of the most celebrated RPG titles known to hardcore gamers. It’s list of titles are well-known for it’s epic stories (not battles no, that’s reserved for Devil Kings and Dynasty Warriors), memorable characters, intuitive battle systems and amazing graphics. The most well-known of the Final Fantasy series (at least for my part) is Final Fantasy VII because it’s the first of the series to land on the PlayStation platform. To date it’s still one of the most successful titles for the console in terms of sales.

The popularity of Final Fantasy VII has even moved Square-ENIX a movie sequel called Advent Children (how many games has THAT), released in 2004 for the PSP, and an anime prequel Last Order: Final Fantasy VII. With fans clamoring for more, Square-ENIX released Dirge of Cerberus; a spin-off sequel (takes place after Advent Children) that focuses on one of it’s side characters, Vincent Valentine. Not one to sit on their noodles, Square-Enix also created 2 prequels games: Crisis Core and Before Crisis (the prequel to the prequel) 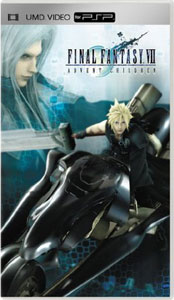 Crisis Core: Final Fantasy VII is Square Enix’s action RPG for the PSP platform. The game mainly focuses around Zack Fair, a 2nd Class SOLDIER, and Cloud Strife (the main guy of Final Fantasy 7) who is just a lowly Shinra Guard at this point of the story. The game’s plot (spoilers alert) revolves around The Shinra Company’s project called SOLDIER, soldiers with powerful combat ability which are made by injecting cells from an Alien being known as Jenova (as told in Final Fantasy 7).

Square-Enix gave Crisis Core an interesting new battle system known as Digital Mind Wave, or “DMW.” This involves a series of reels at the upper left corner of the screen which spin continuously as long as there is SP left to consume. Each rotate independently and upon lining up the three reels of the same character and value, a power-up or a “Power Surge!” will be rewarded to Zack.

Crisis Core gives full credit to the capabilities of the PSP platform by giving the player a full 3D environment that Zack moves around in. Unlike most games that offer this like God of War, you can rotate the camera which IMO improves the over all experience. Battles occur in real time which means you can’t dawdle around while choosing your next move.

In homage to the original Final Fantasy 7 battle system, special abiliities can be added by equipping materia allowing you fully customize your abilities, offensively and defensively. Boring? Not in a long shot, Materia can be fused together to enhance one Materia’s abilities or to make an entirely new Materia.

The game also offers a New Game+ option which gives you the chance to play through the game again fully equipped with your previous gear as well as 300 more missions.

A lot actually. Here’s a few videos to sate your gaming pleasure:

Interesting video of Zack vs Bahamut

For character bios, I suggest you go on to IGN’s Crisis Core page.

If the game wasn’t enough then why not get Crisis Core on your PSP as well? Yep. Square-Enix was kind enough to release a limited edition Crisis Core PSP Slim. Too bad there’s so few of them to go around.