One of the major complaints with Steam is that if you want to lend your PC to someone so they can play your library, you risk having your saves and game progress overridden :(.  Steam is hoping to address that with a new feature via it’s Beta client, Steam Family Sharing.

Steam Family Sharing will enable users to share their entire library of games with up to 10 other Steam members.  Users will be able to send requests to access a  friend’s library, similar to how we authorize our computers via Steam Guard.  Once authorized, you will be able to access to all of the games in that friend’s library, complete with the ability to earn their own Steam achievements and save their own progress to the Steam Cloud. 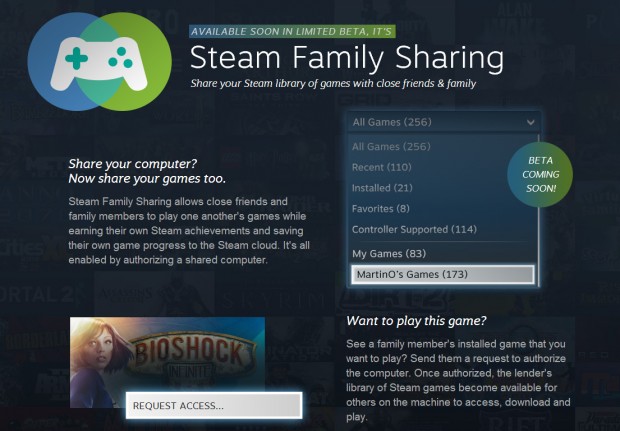 Shared libraries may only be accessed by one user at a time (so no actual game sharing, it’s more of lending).  If multiple users try to access a certain game, the owner of the library will be given priority to access it and other users will be granted a few minutes to either buy the game or quit out.

September 11, 2013 – Steam Family Sharing, a new service feature that allows close friends and family members to share their libraries of Steam games, is coming to Steam, a leading platform for the delivery and management of PC, Mac, and Linux games and software. The feature will become available next week, in limited beta on Steam.

Steam Family Sharing is designed for close friends and family members to play one another’s Steam games while each earning their own Steam achievements and storing their own saves and application data to the Steam cloud. It’s all enabled by authorizing a shared computer.

“Our customers have expressed a desire to share their digital games among friends and family members, just as current retail games, books, DVDs, and other physical media can be shared,” explained Anna Sweet of Valve. “Family Sharing was created in direct response to these user requests.”

Once a device is authorized, the lender’s library of Steam games becomes available for others on the machine to access, download, and play. Though simultaneous usage of an account’s library is not allowed, the lender may always access and play his games at any time. If he decides to start playing when a friend is borrowing one of his games, the friend will be given a few minutes to either purchase the game or quit playing.