This week’s of Famitsu throws a few interesting details on the upcoming release of Monster Hunter 4. 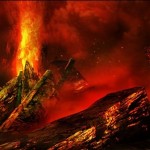 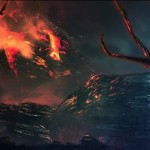 The game will be home to a new map called Volcanic Cavern alongside the comeback of several monsters in earlier Monster Hunter games. Making a come back are the Elder Dragon Teostra, and the Wyverns Gravios, Basarios and and the Iodrome.

The Flame King Teostra is an Elder Dragon originally appeared in Monster Hunter 2. He is the male counterpart of the Empress of Flame, Lunastra. The Teostra’s wings can spread a flammable, volatile powder that explodes when it’s gnashes it’s teeth. Aside from this area effect attack, he also has a flame thrower attack to ward off enemies. 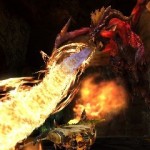 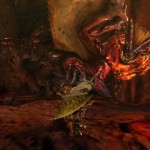 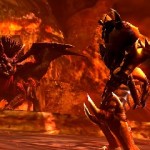 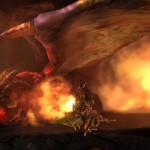 Gravios and Basarios
The Gravios is one of the largest dragon-type monsters. Due to it’s size, it flies slowly but it makes up for the lack of mobility by having a hard body that takes a lot of beating — basically makes life hell for hunters with weapons that do not have enough sharpness.

The Basarios is the juvenile form of Gravios. Like it’s older form, it can release sleeping or poisonous gas from its underside, and on extremely rare occasions a fire plume.

Similar to the Wroggi in MH3U, the Iodrome is a cousin of the Jaggi and Baggi the spits out poison.

Monster Hunter 4 is slated for release in Japan on September 14th for Nintendo 3DS.