The Beta trial for the Linux-client of Steam has officially begun. 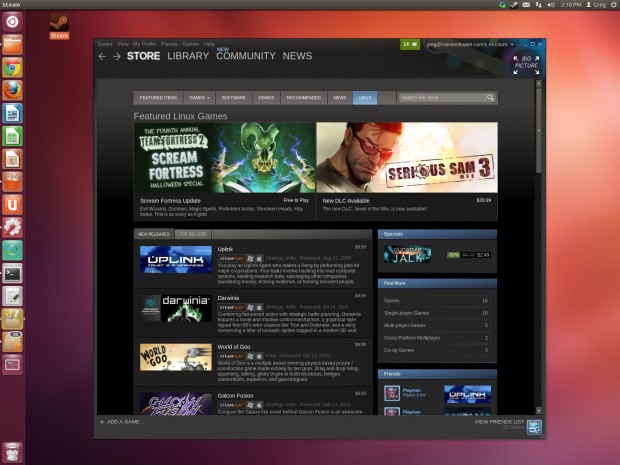 “This is a huge milestone in the development of PC gaming,”  says Gabe Newell, Valve President and co-founder. “Steam users have been asking us to support gaming on Linux. We’re happy to bring rich forms of entertainment and our community of users to this open, customer-friendly platform.”

Currently only available for  Ubuntu 12.04, the Linux variant of the Steam client currently hosts Team Fortress 2, a free-to-play first person shooter by Valve along side approximately two dozen additional Steam titles.  While short on games, the beta client seems to be a new testing bet for Steam’s Big Picture mode which allows for use and compatibility of Steam-tied games with a TV and controller.

The full list of games available on the Linux client are as follows:

Coinciding with this release, Nvidia has also announced renewed support for Linux as it’s latest GPU drivers are now available, promising better Linux performance for daily use and of course gaming.  The new GeForce R310 drivers available for download via the GeForce website and Nvidia claims that they are designed to give  customers the best possible Linux-based PC gaming experience

The official press release for the Linux client for Steam is available below:

[spoiler]Nov 6, 2012–Valve, creators of best-selling game franchises (such as Counter-Strike and Team Fortress) and leading technologies (such as Steam and Source), today announced the launch of a limited access beta for its new Steam for Linux client.

“This is a huge milestone in the development of PC gaming,” according to Gabe Newell, Valve President and co-founder. “Steam users have been asking us to support gaming on Linux. We’re happy to bring rich forms of entertainment and our community of users to this open, customer-friendly platform.”

The Steam for Linux Beta client is currently available for installation on Ubuntu 12.04. “An overwhelming majority of beta applicants have reported they’re running the Ubuntu distro of Linux,” according to Frank Crockett, a member of the Steam for Linux team, “We intend to support additional popular distros in the future; we’ll prioritize development for these based on user feedback.”

Within its first week, Valve received over 60,000 responses to its request for participants in the Steam for Linux Beta. The first round of beta participants has been selected from this group of respondents.

Steam is a leading platform for the delivery and management of PC and Mac games with over 50 million accounts around the world and over 2,000 titles offered.

More details regarding Steam for Linux, including community discussion, beta participants’ feedback, official announcements and syndicated news can all be tracked on the new Steam for Linux Community Hub at http://steamcommunity.com/linux.[/spoiler]

And here’s Nvidia’s official press release for it’s support for Linux and gaming:

[spoiler]NVIDIA today announced the latest NVIDIA® GeForce® drivers — R310 — double the performance(1) and dramatically reduce game loading times for those gaming on the Linux operating system.
The result of almost a year of development by NVIDIA, Valve and other game developers, the new GeForce R310 drivers are designed to give GeForce customers the best possible Linux-based PC gaming experience — and showcase the enormous potential of the world’s biggest open-source operating system.

Available for download at www.geforce.com, the new R310 drivers were also thoroughly tested with Steam for Linux, the extension of Valve’s phenomenally popular Steam gaming platform that officially opened to gamers starting today.

“With this release, NVIDIA has managed to increase the overall gaming performance under Linux,” said Doug Lombardi, vice president of marketing at Valve. “NVIDIA took an unquestioned leadership position developing R310 drivers with us and other studios to provide an absolutely unequalled solution for Linux gamers.”

The R310 drivers support the newest GeForce GTX 600 series GPUs, which have redefined gaming for desktop and notebook PCs by combining revolutionary performance and gaming technology features with an incredibly power-efficient design. Gamers with previous generation GeForce GPUs, including the 8800 GT and above, are encouraged to download these new drivers as well.

For an up-to-date third-party listing of games and applications that are currently in development for Linux, visit the Marlamin site.

For more information on how GeForce GTX GPUs are dramatically changing the way games are played and experienced on Linux, visit www.geforce.com. For more NVIDIA news, company and product information, videos, images and other information, visit the NVIDIA newsroom. The NVIDIA Flickr page hosts the entire lineup of GeForce product photos.[/spoiler]