Home » StarCraft 2: Heart of the Swarm set for March release

StarCraft 2: Heart of the Swarm set for March release

Not much fanfare around it’s revealing, but Blizzard has nonetheless revealed the release date of the as highly anticipated sequel/expansion to StarCraft 2: Wings of Liberty. StarCraft 2: Heart of the Swarm is set for a March 12th, 2013 release. 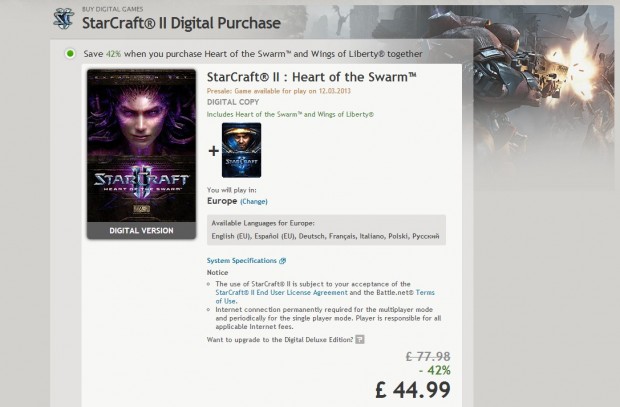 The image you see above is courtesy of Blizzard’s pre-sale FAQ area, revealing the contents of the Digital Deluxe Version which will net you the following goodies: 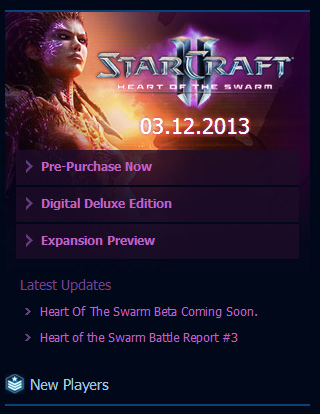 As for pricing, the Heart of the Swarm expansion will cost $39.99 for the standard edition while the Digital Deluxe version will cost $59.99.  Do note that this price is on top of the price of getting a copy of Wings of Liberty as well.

A bit of good news for people who haven’t purchased the first game, Blizzard will be offering a digital bundle that contains both Wings of Liberty and Heart of the Swarm.

Below is the official press release for your reading pleasure:

IRVINE, Calif. – November 13, 2012 – Blizzard Entertainment, Inc. today announced that StarCraft® II: Heart of the Swarm™, the first expansion to Blizzard’s award-winning real-time strategy game StarCraft® II: Wings of Liberty®, will be available in stores and online beginning March 12, 2013. Heart of the Swarm features a new campaign continuing the epic story of Sarah Kerrigan, Queen of Blades, as she gathers the remnants of the zerg Swarm and plots her revenge against the treacherous dictator of the Koprulu sector, Arcturus Mengsk. It also introduces several new multiplayer units and features that enhance the acclaimed StarCraft II online experience.

Presales for the standard digital and Digital Deluxe versions of Heart of the Swarm are now available. Players who would like to purchase either version and be ready to play the moment the expansion launches can do so now by visiting www.StarCraft2.com. For players who prepurchase, the expansion content will automatically be digitally delivered via StarCraft II’s streaming launcher prior to the release of Heart of the Swarm. Players who would like to preorder the standard box or the retail-exclusive Collector’s Edition can do so by visiting their local retailer.

“With Heart of the Swarm, our goal has been to expand on the multiplayer action and cinematic storytelling of Wings of Liberty,” said Mike Morhaime, CEO and cofounder of Blizzard Entertainment. “Combined with features like unranked matchmaking and our new leveling system, this expansion elevates the StarCraft II experience for players of all skill levels.”

The Digital Deluxe version of Heart of the Swarm includes a full digital copy of the expansion along with the following in-game bonus items:

StarCraft II Torrasque: Crush the enemies of the Swarm with the indomitable Torrasque, a fearsome new look for your zerg Ultralisks.
StarCraft II Battle.net® Portraits and Decals: New Swarm-infested Battle.net portraits and decals help you customize the look of your online profile and in-game army.
World of Warcraft® In-Game Pet: The Baneling companion pet is bursting with enthusiasm and ready to explode onto the Pet Battles scene.
Diablo® III Blade Wings and Banner Sigil: Grow zerg-like wings in honor of the Queen of Blades, and unfurl an exclusive banner sigil to mark your allegiance to the Swarm in Sanctuary.
The Collector’s Edition of Heart of the Swarm includes the full version of the game on DVD-ROM and contains the following exclusive bonus items, in addition to the content from the Digital Deluxe version:

Behind-the-Scenes DVD and Blu-ray: Immerse yourself in the StarCraft universe with developer commentary, interviews with voice actors, and an in-depth historical retrospective on StarCraft’s eSports legacy narrated by key members of the community.
Collector’s Edition Soundtrack CD: Enhance your Heart of the Swarm musical experience with this collection of more than a dozen tracks from the game.
Heart of the Swarm Hardcover Art Book: This 144-page tome features never-before-seen art from the expansion, including early concept sketches and meticulous 3D renderings.
Zerg Rush Mousepad: This Collector’s Edition mousepad depicts the Terran Dominion holding out desperately under the onslaught of the Swarm.
Heart of the Swarm picks up the story of StarCraft II where Wings of Liberty left off, focusing on Kerrigan’s quest to reunite the Swarm and exact revenge on Arcturus Mengsk. Over the course of 20 campaign missions, players will follow Kerrigan as she sweeps across the galaxy, incorporating a variety of distinctive zerg species into her brood. Kerrigan will grow in strength from mission to mission, and players will be able to customize her with powerful new abilities, as well as evolve various zerg strains into fearsome new subspecies to suit their play style.

New weapons of war also debut in Heart of the Swarm’s multiplayer, including new units such as Terran Hellbats, Zerg Swarm Hosts, and Protoss Tempests, while certain existing units from Wings of Liberty will be updated with new capabilities. New features will enhance the game experience, including group and clan systems; unranked matchmaking; Global Play, enabling players to battle others in different regions around the world; additional stat tracking; user interface improvements; an enhanced physics system, for more visceral looking battles; multiplayer replays, to watch replays with friends; a leveling system that gives Heart of the Swarm players a new way to earn customization options for their online profiles; and much more.

With multiple games in development, Blizzard Entertainment has numerous positions currently available — visit jobs.blizzard.com for more information and to learn how to apply.

About Blizzard Entertainment
Best known for blockbuster hits including World of Warcraft® and the Warcraft®, StarCraft®, and Diablo® franchises, Blizzard Entertainment, Inc. (www.blizzard.com), a division of Activision Blizzard (NASDAQ: ATVI), is a premier developer and publisher of entertainment software renowned for creating some of the industry’s most critically acclaimed games. Blizzard Entertainment’s track record includes fourteen #1-selling games and multiple Game of the Year awards. The company’s online-gaming service, Battle.net, is one of the largest in the world, with millions of active players.