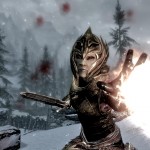 A new update has been released for The Elder Scrolls V: Skyrim and should now be available via Steam (if not already installed on your system).

The new patch and fixes a number of Skyrim bugs and Skyrim crashes related to launching mods, loading save files and often resulting in unresponsive controls or game crashes.

– Fixed issue where keyboard would fail if Rename Item was selected before choosing the number of charges, while using Arcane Enchanter