Yoshinori Ono has officially announced the release date of the highly anticipated crossover fighting title Street Fighter X Tekken to be March 6, 2012 for North America and March 9, 2012 for Europe. 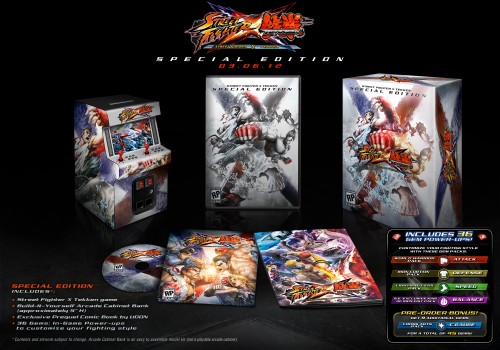 For collectors, the very limited Special Edition will include the following items:

– 36 Gems: Includes All Pre-Order Packs Plus An Exclusive Pack

– Total of 45 Gems When You Pre-Order

For those unfamiliar with the Gem system, Capcom explains it as:

The Gem System is an all-new customizable power-up system that creates an exciting way for everyone to experience the Street Fighter and Tekken fighting systems. Choose from dozens of Gems that modify characters’ abilities and stats. Check out the new trailer that sheds light on this new way to experience fighting games.

Street Fighter X Tekken will be available for the the PlayStation 3 and Xbox 360 at launch. Ono confirms that the PC and PS Vita versions will be announced in the coming months.