The Xbox division of Microsoft and LucasArts unveiled a limited edition Star Wars-theme Xbox 360 at the 41st annual Comic-Con International. The custom themed 360 unit bears resemblance to the two beloved droids of the franchise, R2-D2 and C-3PO, a fan-magnet if I ever saw one. Kudos to Microsoft for coming up with this one. 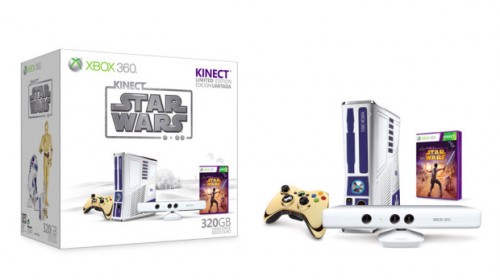 The Limited Edition Star Wars Xbox 360 will only be available as a bundle which includes the R2-D2 blue-and-white themed console, a custom Xbox 360 Wireless Controller inspired by C-3PO and the first ever white Kinect sensor.

The full set of included items for the bundle is listed below:

The Xbox 360 Limited Edition Kinect Star Wars Bundle is set to arrive at stores alongside the release of the Kinect Star Wars game but is now available for pre-order. The Star Wars bundle is priced at $449.99.