Blizzard made a conscious decision to leave anti-aliasing out of the retail version of their new game, StarCraft II: Wings of Liberty.

But from the screenshots we’re seeing, there’s some instances that the game has Anti Aliasing right? Well it seems that the reason for that is due from the difference between the green (NVIDIA) and red (ATI) camp.

Here’s a comparative screenshot from Guru3D: 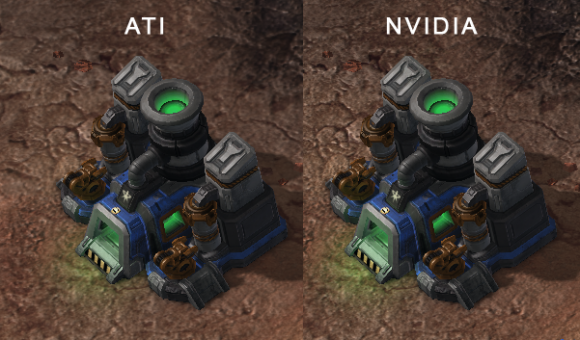 NVIDIA has added AA for StarCraft II by including an override option within their Control Panel. The result however is a hit in performance (but if you have a card like the GeForce 460 then this is somewhat negligible). ATI on the other hand opted to focus on performance and didn’t follow suit.

Here’s an official statement from ATI regarding the lack of Anti-Aliasing support for Starcraft II:

AMD constantly strives to deliver great gaming experiences for our customers and the upcoming launch of Starcraft II is no exception. Blizzard’s focus on incredible game play for all, means that gamers using ATI Radeon(tm) products can enjoy smooth HD gameplay and industry leading image quality with our current generation of ATI Radeon products as well as many of our past generation cards.

In discussions during the development of StarCraft II, Blizzard indicated that they would not initially include options to set levels of in-game anti-aliasing (“AA”). This meant that support for AA within StarCraft II would only be made possible by including it in the driver, an approach that could significantly impact performance.

Some third party reviews of the Starcraft II beta echo our concerns that AA can cause gameplay impairment. In these reviews, the third parties found that 4x AA led to a reduction in fps rendering at lower screen resolutions, which only became more noticeable at larger resolutions.

After evaluating our options, our engineering team opted not to provide AA support for StarCraft II within the Catalyst Control Center, even though the competition has included AA support in their driver at launch.