It’s a bit early but One Manga has bid farewell to us all. While we still have the week to enjoy scantilations on the site, expect to see that all content to be gone by early next week (RIP OM July 2010) :(. The decision to take down One Manga and it’s scantilation content comes from Manga Publishers who consider it a violation of their copyrights (hence the slinging of DCMA takedowns).

While most of us will be moving on to other scantilation sites, it’s still sad to see One Manga go. I remember reading Air Gear (before it got moved), Strawberry Panic, Ouran Host Club and a slew of other titles on the site.

On that note however, one has to wonder if OM’s sister site (1000Manga) will also get hit by this decision.

Here’s Zabi’s parting words for us (screencapped and quoted below): 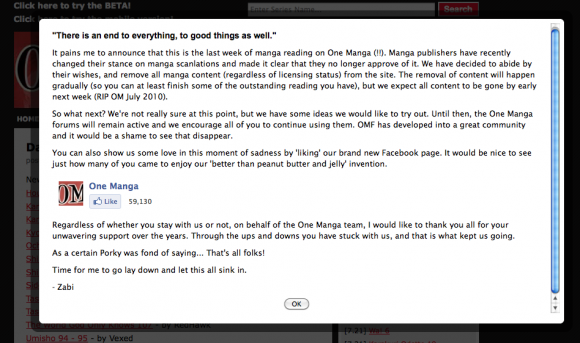 “There is an end to everything, to good things as well.”

It pains me to announce that this is the last week of manga reading on One Manga (!!). Manga publishers have recently changed their stance on manga scanlations and made it clear that they no longer approve of it. We have decided to abide by their wishes, and remove all manga content (regardless of licensing status) from the site. The removal of content will happen gradually (so you can at least finish some of the outstanding reading you have), but we expect all content to be gone by early next week (RIP OM July 2010).

So what next? We’re not really sure at this point, but we have some ideas we would like to try out. Until then, the One Manga forums will remain active and we encourage all of you to continue using them. OMF has developed into a great community and it would be a shame to see that disappear.

You can also show us some love in this moment of sadness by ‘liking’ our brand new Facebook page. It would be nice to see just how many of you came to enjoy our ‘better than peanut butter and jelly’ invention.

Regardless of whether you stay with us or not, on behalf of the One Manga team, I would like to thank you all for your unwavering support over the years. Through the ups and downs you have stuck with us, and that is what kept us going.

As a certain Porky was fond of saying… That’s all folks!

Time for me to go lay down and let this all sink in.