The PS2 celebrated it’s first decade just a few weeks prior and now we’re celebrating the 5th birthday of it’s portable little brother, the Sony PlayStation Portable. In it’s lifetime, the PSP has already sold close to 60 million units worldwide and currently has four iterations of it’s hardware as listed below:

Love it or hate it, the PSP community is continuously growing (of course the fruit competitor would want to diminish that claim by the numbers) with no small thanks to the homebrew community that’s undoubtedly on of the many reasons people love the PSP format.

Here’s a brief summary of the PlayStation Portable’s timeline: 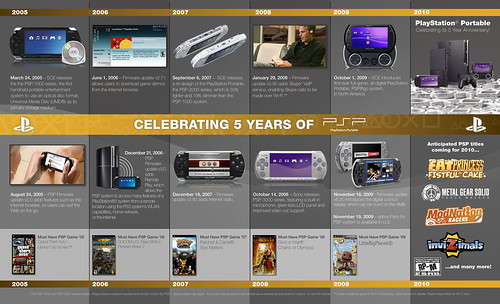 For it’s metrics, the PSP currently has 520 PSP software titles, including God of War: Chains of Olympus, Gran Turismo, LittleBigPlanet, Resistance: Retribution, and SOCOM: Fireteam Bravo, more than 20,000 movies and TV episodes, “minis,” digital comics, original programming, and more than 300 games available on the PlayStation Network. Of course the competition has more but we’re celebrating the PSP’s birthday so no party poopers.

The Sony offered their thanks to everyone via the Official PSP blog:

The PSP platform has seen tremendous growth in the last five years and we have you to thank. We’re extremely grateful for your enthusiasm and feedback because without it, the PSP system wouldn’t be what it is today. We look forward to providing you with more great content and many more years of portable entertainment in 2010 and beyond.

Thanks Sony, and Happy Birthday PSP 😀