MyBrute has asploded the internets. It’s gained so much attention that a MyBrute Guide is needed for you to create the ultimate BRUTE! Here’s a newbie guide to anyone interested in the game. Post a comment if you want to contribute to the MyBrute Guide. Credits due will be given to your contributions.

What is My Brute?  MyBrute is a free online flash game that’s free, online and a flash game (did that make sense? o.O).  Where you battle other brutes and go like every other RPG, and that’s level up and beat more brutes!

My brute.com – Creating your Brute

You’ll start off by customizing your Brute, but even before that, you should start off by seeking a Brute Master to sign up.

Just click the link above, specify a name for your Brute, and customize his/her looks. After you battle (and no doubtly lose to) your master, just add a password so that only YOU can your Brute.

Brutes gain experience and level up from fights. Each time they level they have a chance to increase one of their three stats strength, agility and speed. They also have a chance to gain a new weapon to use in battle, a new specialty, or a new pet.

There are a total of 28 specialties a brute can gain every time they level up.
Specialities are passive abilities that make your brute stronger, for example a bonus to stamina, strength, or damage mitigation.

Supers are powers that your brute can activate during battle, like throwing a bomb or drinking a potion.

Dog
The weakest of all pets. Takes about 20 damage before it dies, does about 4 damage per attack, attacks 2-3 times.
Wolf
Stronger than the dog, this pet does about 12 damage per attack, and attacks very frequently. It also dodges incoming attacks.
Bear
The best bonus your brute can have! Can deal and endure a LOT of damage!

Rankings are determined by how well you do in the tournament: 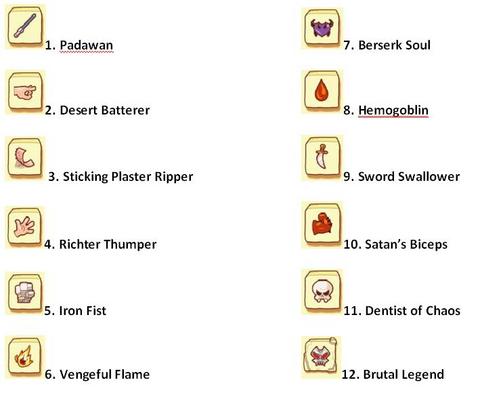 Rankings in order from best to worst:

How to get a bear

Think you can add more to the MyBrute Guide? Post a comment and share your thoughts. If you want a quickway to level up though, there’s always MyBrute Cheats and MyBrute Hacks for you.