Evangelion: 2.0 You Can (Not) Advance

The second Neon Genesis Evangelion movie, Evangelion: 2.0 You Can (Not) Advance is now set for June 27th. It continues where Evangelion: 1.0 You are (Not) Alone left off and overwrites the original series’ events. 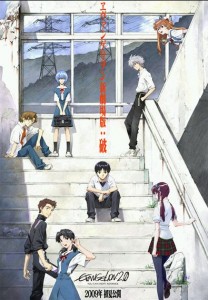 Yes, you read that right, overwrite.  This was confirmed via the short preview at the end of Evangelion 1.0. New characters (you can see her in the poster on the right), new scenes and a whole new storyline is promised for Evangelion 2.0.  Will it remake the fanbase?  I certainly hope so.  One of the qualms about Evangelion is that it’s too complex to get a grasp of everything in more than just one, two or seven sittings. It took me 12. Aside from everything new, one huge reason to look forward to Evangelion 2.0 is the return of Asuka Langley Sohryu.  😀 Digital remaster versions of the TV series for DVD and Blu-ray is now available starting with episodes 1-6.  A remaster version of the remake movie dubbed Evangelion: 1.11 is also available. [via Sankaku] If you’re dying to know what 2.0 has in store, you can watch the sneak peak. Do note that there are massive spoilers (unless you’ve watched the series already :D)