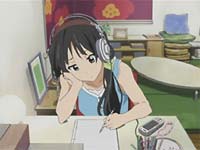 Although I don’t watch or follow titles as fervently as I did when I was still in school, I still find time to watch some anime to pass time or follow up on titles that I simply can’t drop (no, not naruto and bleach nor dragonball :D).  I can only manage a few episodes a week because of my hectic schedule so I make sure I pick titles that I can really enjoy.

Here’s a few titles currently on my to-watch list and some notes on why they should be on yours too. 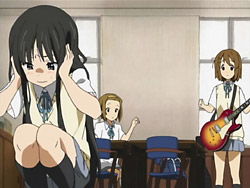 Kawaii Girls + Band Instruments = EPIC WIN!!!
I can’t believe how popular this anime is right now, so much that it actually drove sales of instruments shown in the anime (that’s some otaku power for you). K-ON! rotates around Yui, Mio, Ritsu and Mugi, four high-schoolers aiming for a once in a lifetime performanc, Budokan Live.

It’s probably not for anime fans looking for a more “macho” anime since it’s more cutesy rather than umph but rest assured that K-ON’s soundtrack is not just a girly tune. It’s actually pretty good.

You can check out the OP and ED below:

It’s probably one of the more interesting titles you’ll get to watch today unless of course you’re a bigger fan of the next title.

It was still rumor until the supposed re-run of season one turned out to be the first episode of season 2 😀 How’s that for marketing?

As expected, episode one gives us the same mind-bending paradox that made the first season such a hit. If you decide to watch the series, be sure to pick up your brain after the series is over. 😀

So what’s the catch?  Where’s my dance ending 🙁

On a critical note, the first series had more polished artwork although the full manga adaptation is more consistent. 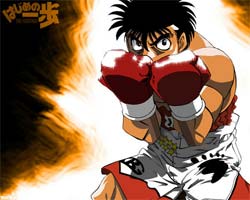 New Challenger is the continuation of the series AFTER both movies (Ippo’s title defense and Kimura vs Mashina). Ippo’s sights are now set to Ricardo Martinez the WBC Featherweight Champion and Takamura on Brian Hawk the WBC Middleweight Champion.

The series is currently on episode 20 and things have definitely heated up. It’s Brian Hawk vs Mamoru Takamura for the championship belt at the moment so if you haven’t caught on the series yet, now is a good time to do so.

I don’t have a PS3. Why did I just say that? Because Valkyria Chronicles is the anime adaptation of a PS3 game of the same title. My first impression was that only people who had played the game would like it. It was a premature judgement as I ended up liking the series. It’s comic and light at times and has less action than the game but it’s still an interesting watch.

Not on this list is Detective Conan but since it’s been so long and winding (currently at episode 530+). If you have an anime title you want to share that’s worth watching, post a comment. It’s free 😀