Update 2: Confirmed schedule is as follows:

Update 3: Activities have been added

HERO TV, of Creative Programs, Inc., a subsidiary of ABS-CBN, is a cable channel that features the craziest, funniest and the latest cartoons, youth-oriented programs, and anime shows. It was launched on October 1, 2005 in Metro Manila and is one of the highest-rating
cable channels in the country.

On November 21 and 22, Hero TV will be having Hataw Hanep Hero – The Amped Edition, the biggest and the grandest and the most anticipated youth fair in the country. Now on its fourth year, H3 partners with ABS CBN Interactive’s gaming team, AMPED – the group behind Warrock, Tantra, Getamped, Cronus and Ngage – to give the event an exciting and dynamic youth event highlighting their myriad of interests – from music to technology, sports, arts and fashion.

The first Hataw Hanep Hero was held at the Philippine Trade Training Center with a crowd of 15,000-strong. Last year, we took over the the SMX Convention Centre, where 20,000 anime and cartoon fans gathered in their finest costumes and fiercest game faces. Hero, together with Amped, is set to make this year’s event become the ultimate anime and youth entertainment fair in the country.

Hero 2006 and 2007 was quite memorable although more so than the last for a number of reasons. I wonder what’s in stored for the cosplayers this time around. I’ve been hearing several rumors and talks within the cosplay community about this years event not the mention the controversies (or so they say) surrounding past events.

As you can see, there’s very little information released to the public so far. Time seems to have changed things with the much awaited event.  Guess we’ll just have to go and find out for ourselves.

How to get to Silver City Mall:

From North Bound lane of edsa turn right to intersection where Edsa Shrine is (beside Rob Galleria). That road will pass thru Meralco , Medical City , Home Depot , vicinity of Valle Verde and last, there’s this village looking entrance with fountain & a big round monument thingy… turn right to that road (you’re now entering tiendesitas). this comes BEFORE the intersection with the overpass…
Then just go straight you’ll see SM Hypermarket on the left & on the right side is Silver City (it’s just the building across SM) it looks like a smaller version of SMX… ^-^

another route will be if you’re coming from Q, UP diliman, Mirriam College & Ateneo (along katipunan ave), Blue Ridge village, Eastwood City, then go straight and you’ll end up seeing the intersection with overpass & then Tiendesitas then next to it ung SM Hepermarket. Don’t turn left din, you might get lost and end up in Marikina

For those who want a printable map, here’s something cooked up by Ichiraku for you. 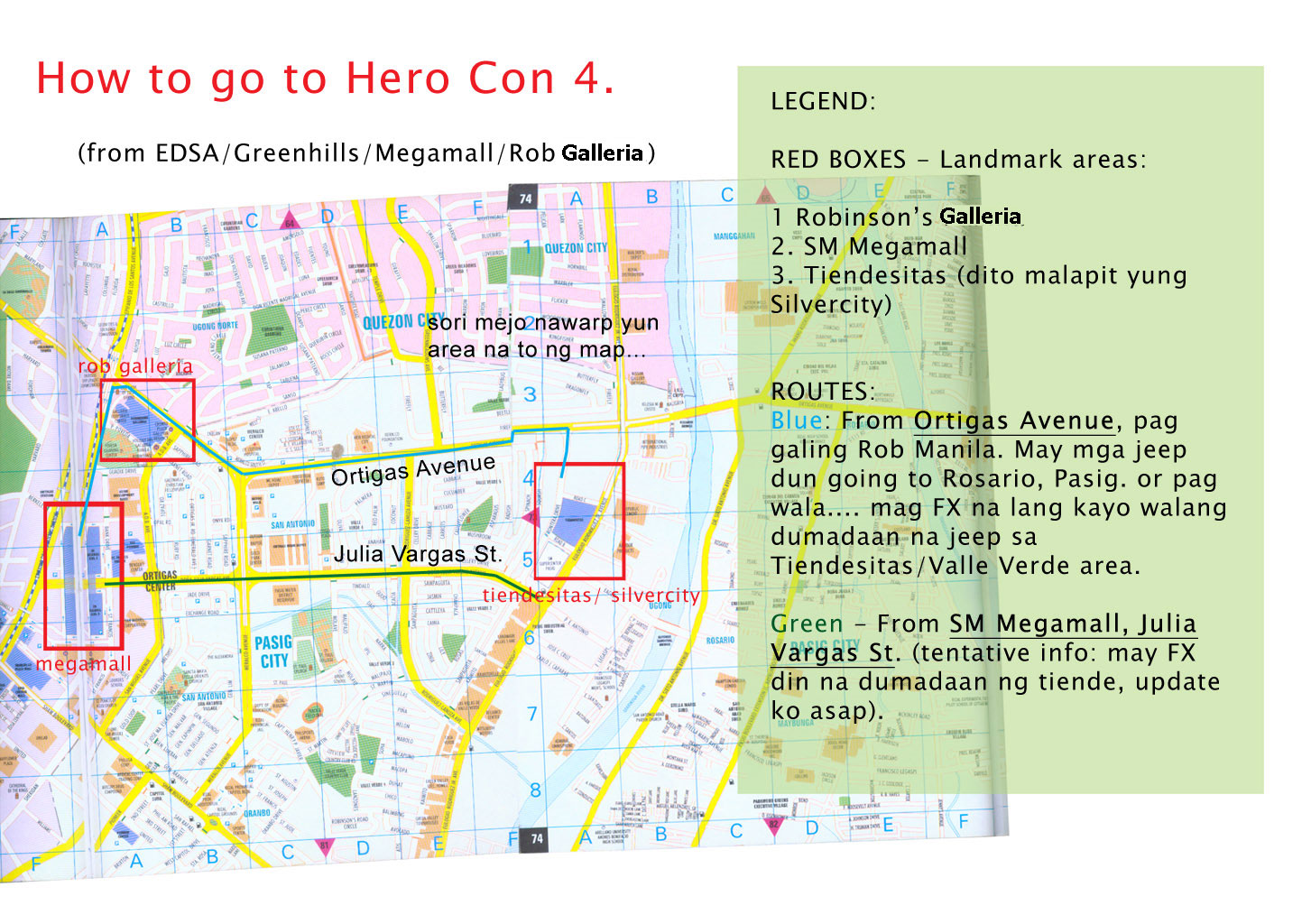 Categories of the cosplay event are as follows:

o League of Heroes Division (13 years old and up)

Criteria for League of Heroes and Ohayoo Divisions:

o Group Cosplay (minimum of 6 and maximum of 15)

participants should be at the start of the event which is on November 22 for registration.

On the spot Draw a Hero Contest

Battle of the Bands

Schedule at Next Page