Sony and Nintendo are all set with their new and improved (?) models of their portable gaming consoles.  Before you start screaming apples and oranges, this post is meant to help you decide which of the new models is worth picking up and which one should you get the old model of.  (DS lite for DS and PSP Slim for PSP).

Up against each other are Sony’s PSP Brite (or PSP-3000) and Nintendo’s New DS: DSi 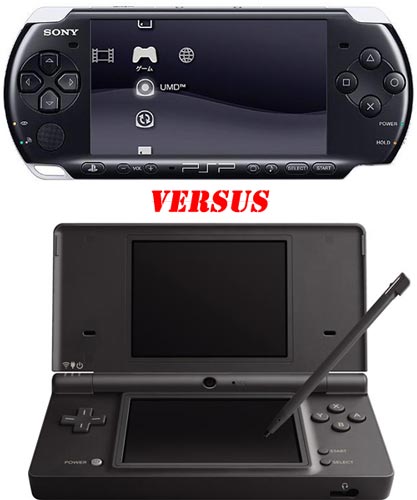 Although gaming outdoors is not for everyone (with all the pollution and all that stuff), the LCD upgrade is a definite plus.  The benefit will most likely be obvious when watching videos and hardcore gaming.  The downside?  There’s no downside since the rumored battery life reduction is just a rumor.  The PSP Brite lasts as long as the PSP Slim.

Yep.  There’s quite a lot of innovation for the DSi.  The two cameras will provide some interesting interaction an the SD slot opens a lot of doors XD.

It’s about time for some DS / Wii interaction and more options on the online store.  Nintendo is playing catch up to what Sony has already established and gamers already enjoy.

Getting a DSi? No more strap for you!

Now before you jump the gun, I’ll explain why there’s less cons with the PSP Brite than the Nintendo DSi.

First off, the first 2 cons are already the systems flaws from the very beginning.  They’re great additions but I doubt the experience will change radically with the inclusion of a 2nd memory stick slot or a 2nd analog stick (strictly speaking for CURRENT and OLD games).  As for the lack of custom firmware, give it a few more months.  The PSP Brite has been released only in Japan, for now.

On the DSi side, the removal of the GBA slot chops off quite a lot of experience.  You won’t be able to play GBA games.  Fine, you still have a GBA lying around.  But what about your Guitar Hero grip?  Say goodbye to it since the GBA ports gone.

The biggest blow is the region lock on the DSi.  This means that if you bought a Japanese DSi, you can play older games on it without any problem but for newer games, you can only use Japanese region software.

Here’s Nintendo’s take on it:

DSi is region locked because DSi embeds net communication functionality within itself and we are intending to provide net services specifically tailored for each region. Also because we are including parental control functionality for Nintendo DSi and each region has its unique age limit made by different independent

Still the DSi is a definite step forward into the multimedia portable device market that Sony and the PSP has been enjoying for quite sometime now.  Personally though, I’d be getting a DS Lite over a DSi.  As for the PSP, wait for Custom Firmware before jumping to the PSP Brite.