Home » The countdown to Toycon 08

The countdown to Toycon 08

If you’re reading this post then it’s just 10 days to the 7th Philippine Toys, Hobbies and Collectibles Convention 2008, which is still one of the biggest anime/enthusiast event in the country.  Known as just Toy Con to most, the convention is an ode to anime lovers, toy lovers, model kit hobbyists, comic book lovers, collectors and anyone who loves pretty girls (yeah you know you do).  If you’re wondering what Toy con has in stored for you, here’s a cosplayer (Jac Ting Lim) from last year’s convention.

The picture is after the jump.

But just in case you forgot what event I’m talking about:
What: The 7th Philippine Toys, Hobbies and Collectibles Convention 2008
When: June 14-15, 2008, Saturday- Sunday
Where: Megatrade Hall 2-3, SM Megamall
Mandaluyong City, Philippines
www.toyconph.com 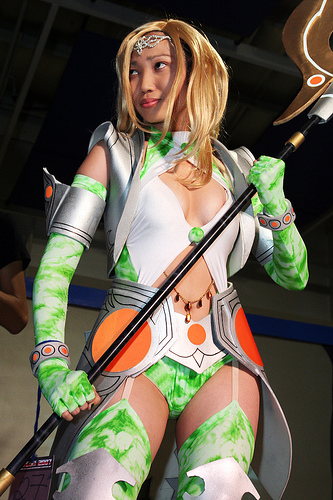 Aside from cosplayers, you’ll also get to see collections of toys, ranging from DC, Marvel, Star Wars and even Anime

To anyone interested in the events that will be held at Toy Con 08, here’s a quick list with links to their respective rulings if you’re interested:

Unlike other events like last week’s Mangaholix, which left a lot of cosplayers bored, cramped (Mangaholix was limited to just one Hall of SM X, I’ll post my very late Mangaholix Aftermath post after I get home, I left the draft in a text file on my home computer) with very little to do, Toycon has so much to more offer which is why it’s one of the events to attend if you’re looking for what’s hot and what’s not in the Philippine Cosplay Arena.  The event will also be held in 2 Megatrade Halls instead of the usual 1 so there will be a lot of movement space for attendees, cosplayers and the merchandise booths to.

Simply because it’s one of the most interesting contests on the event. The main goal of the event is to blend cosplay with real life. Past incarnations of the event had themes but this time around, it seems like it’s now an Open Category thing so I’ll be expecting quite a few surprises.

I love cinematography which is why I can appreciate a good film and more so if it’s an indie. 2006’s Star Wars-based fan film took the cake for me.

I’m a big fan of toy dioramas since I’ve tried it as a hobby (but failed miserably) as a kid.

I think it’s a given why I’m looking forward to the COSPLAY event. If things push through this week, you might even see me in a costume ^_^. Look forward to it.